Beware Ndola! There Is A False Prophet Among You! 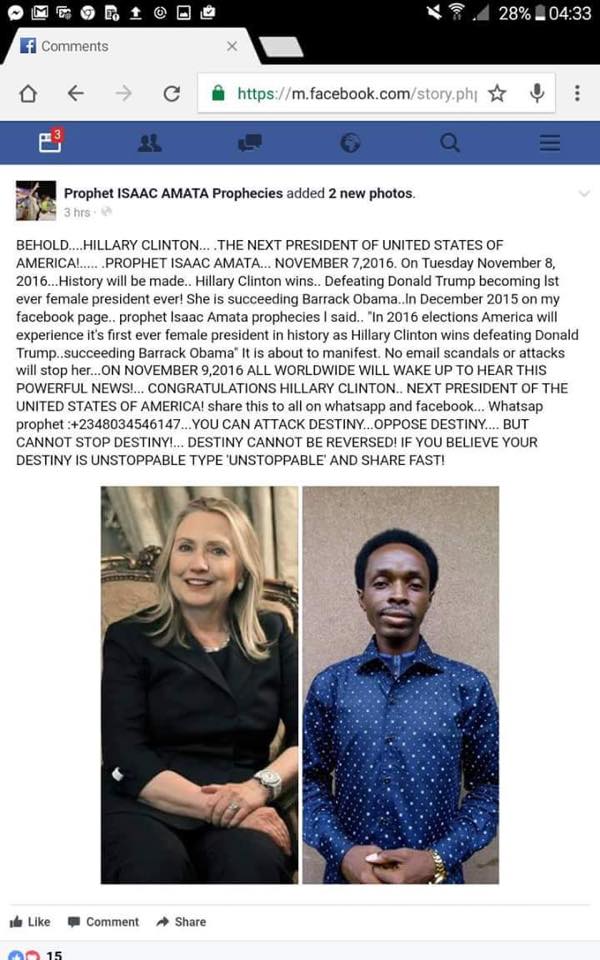 This weekend Nigerian prophet Isaac Amata is holding the Ndola Fire Crusade in Ndola, Zambia. The crusade is being promoted to Zambians inviting everyone to come so they can get their live prophecy from Amata. In addition attenders are welcome to pick up their deliverance materials.

On Tuesday November 8, 2016 History will be made Hillary Clinton wins Defeating Donal Trump becoming 1st ever female president ever! She is succeeding Barrack Obama. In December 2015 on my facebook page, ‘prophet Isaac Amata prophecies’ I said In 2016 elections America will experience its first ever female president in history as Hillary Clinton wins defeating Donald Trump, succeeding Barrack Obama. It is all about to manifest. No email scandals or attacks will stop her on November 9, 2016. All worldwide will wake up to hear this powerful news! Congratulations Hillary Clinton, next president of the United States of America.

Just a couple hours ago Amata deleted all the prophecies concerning the US elections from his Facebook page. Why? Because they are false! I have uploaded copy of the post quoted above so you can see for yourself!

And Amata is not the only African prophet who prophecies a Hillary Clinton victory in the US elections. Prophet TB Joshua also recently said that he saw a woman being elected as the next US president. https://www.naij.com/1037450-great-news-tb-joshua-reveals-winner-us-presidential-election.html

Amata, Joshua and many others like them are false prophets! They are not to be revered, feared or listened to! If a man is a prophet then the tests of Scripture must be applied, and discerning Christians must test the spirits to see if they are from God.

HERE ARE THREE TESTS FROM SCRIPTURE FOR ANYONE WHO CLAIMS TO GIVE PROPHECIES FROM?GOD:

If the prophecy is not true there are no second chances. The man who claimed to speak by direct revelation from God must be shunned and he should be glad he is not prophesying under OT law because he would be guilty of being a fraud and stoned to death for the false prophecy In short if Amata and Joshua were living in OT times under Hebrew Law they would be executed for their false Clinton prophecy. Im so glad that we live in the age of grace – they can still repent of their sin and find forgiveness!

If a prophet prophecies and that prophecy contradicts revealed truth he is a false prophet. If God has already spoken on the matter, and any man contradicts God’s Word the warning bells should be ringing!

For example, Jesus said clearly, “in the world you will have tribulation, but be of good cheer, I have overcome the world.” Yet there are many prophets who claim that it is not God’s will for a Christian to have tribulation! ?Most of these false prophets couple their message with a health and prosperity message that is opposite of the revealed truth in God’s Word.

If a man is a true prophet of God he will be right 100% of the time! It is true that some prophecies in the Old Testament were a call to repentance and the implication was that if the people would head the warning of pending judgement, God would relent and forgive them. Jeremiah spoke of Gods judgment against a nation. If when they hear the warning they repent, God will relent (put off impending judgment) of the disaster He was going to bring (18:7-10). This was not an unspoken condition but a revealed condition to the fulfilling of the prophecy. This is also exactly what happened in the case of the prophet Jonah and the city of Ninevah (Jon. 3:4-10). One reason Jonah fled to Tarshish is because Jonah knew the condition of Jer. 18:7-10. He knew God would be merciful if the Ninevites repented and Jonah wished for their destruction (Jon. 4:2).God relented and did not immediately destroy Ninevah, the capital of Assyria. God did destroy Ninevah approximately 100 years later as prophesied in the book of Nahum. In 612 BC, the Medes and the Babylonians destroyed Ninevah.

If a person speaks for God as a prophet, the prophecy will be true, not contradict previous truth, and will come to pass without fail! The OT prophets who spoke for God had no failures! Remarkable prophecies that came to pass to the smallest detail. There were 37 OT prophecies that had to do with Jesus Christ. Every one was fulfilled!

If a person claims to be a prophet and speak for God, but not all of his prophecies are not true, contradict previous truth or fail to come to pass, we are instructed not to honor (fear) him. We are not to listen to what he has to say. He is a deceiver, a false prophet.

Deuteronomy 18:20-22 says, “But the prophet who presumes to speak a word in My name, which I have not commanded him to speak, or who speaks in the name of other gods, that prophet shall die. And if you say in your heart, How shall we know the word which the LORD has not spoken? when a prophet speaks in the name of the LORD, if the thing does not happen or come to pass, that is the thing which the LORD has not spoken; the prophet has spoken it presumptuously; you shall not be afraid of him.”

Peter wrote this urgent warning that needs to be heeded by all today who call themselves Christians,

“But there were also false prophets among the people, even as there will be false teachers among you, who will secretly bring in destructive heresies, even denying the Lord who bought them, and bring on themselves swift destruction. (2Pt.2:1).

Ndola! Beware! ?There is a false prophet among you! ?Don’t be fooled into honoring those who God has cursed!